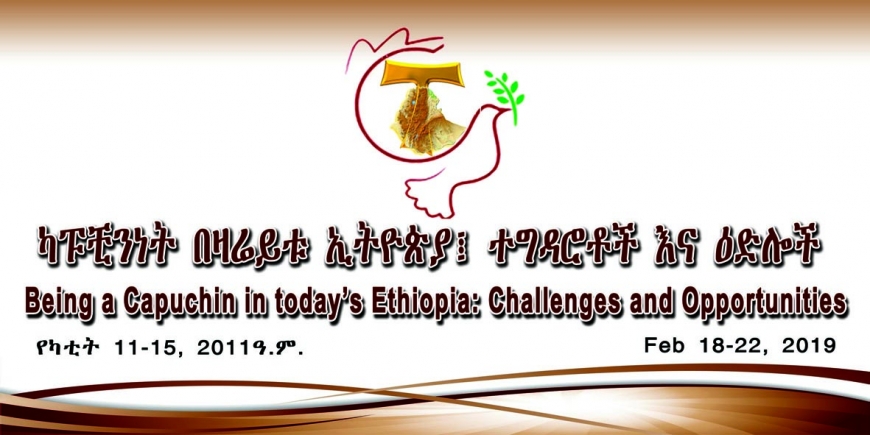 The Capuchin Province of Ethiopia, Mary “Kidane Meheret” celebrated its first Extraordinary Chapter from February 18-22, 2019 at St. Francis Friary – Addis Ababa, Ethiopia, with the motto: “Being a Capuchin in Today’s Ethiopia”. The Chapter was presided over by the Minister General, Br. Roberto Genuin, OFM Cap. Br. Kilian Ngitir, General Councilor for Africa, was also present in the Chapter.  Being the first Chapter since its erection, the efforts exerted by the Provincial Minister, Councillors, and all the Provincial Offices, so as to organize the Chapter and make it colorful, were appreciated by the Capitulars and all the brothers who came for the occasion.

In the Chapter various reports were presented and thoroughly discussed, namely, reports by the Provincial Minister, the Economic Commission, formation Council, and Education Commission. Questions for group discussion were forwarded from each presenter and at the end of each day views of the brothers were brought forward through the secretaries of each group. Panel discussion was also conducted on the presentations with the General Minister intervening when it was necessary. A summary of the previous day was presented each morning.

On the last day of the Chapter some proposals were presented to the Capitulars for approval and majority of the proposals were approved with major votes. The Chapter was concluded with a clear mandate given to the Provincial Minister and his Council.

The Province was also so fortunate to have the Minister General to preside over to its first Chapter and participate in the first thanksgiving Mass of one of our brothers who was just ordained Priest in the Ethiopian Rite.  He also visited all the formation houses of the Province and some other fraternities as well.

We thank the Minister General for his visit and for the brotherly love shown to us during his stay in Ethiopia.