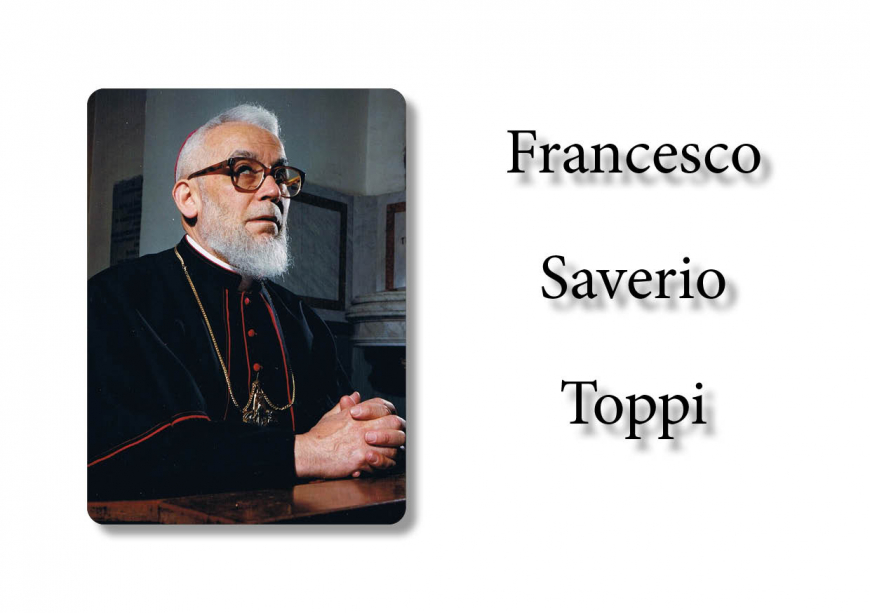 In the very short time of just under nine years – since June 4, 2013 – The Most Reverend Francesco Saverio Toppi, Capuchin friar and Archbishop of Pompeii, has taken a decisive step in the canonical procedure for the causes of beatification and canonization. A request for instruction from the diocesan inquiry for testimonies and other related documentation collected up until January 20, 2022 was sent in and published after the approval of the Super vita virtutibus decree by Pope Francis.

This means that Archbishop Toppi lived the theological and cardinal virtues as well as those of his state as a consecrated person, priest and bishop in a "heroic" way, and at the same time, was conferred the title of Venerable.

Furthermore, the decree super virtutibus opens the way to the presentation of an extraordinary event that cannot be scientifically explained (i.e., a miracle) attributable to his intercession. After collecting the evidence with the related documentation and undergoing a diocesan investigation, the Congregation for the Causes of Saints will then examine and study the case, via specialists who are proficient in the subject at hand. If at the end of the process the declaration is reached that the case cannot be scientifically explained and is attributable to the intercession of the Venerable, the beatification rite will be carried out.

There is still no such miracle today; or maybe there is one, but there’s just no news of it yet; it very well could be on the way! 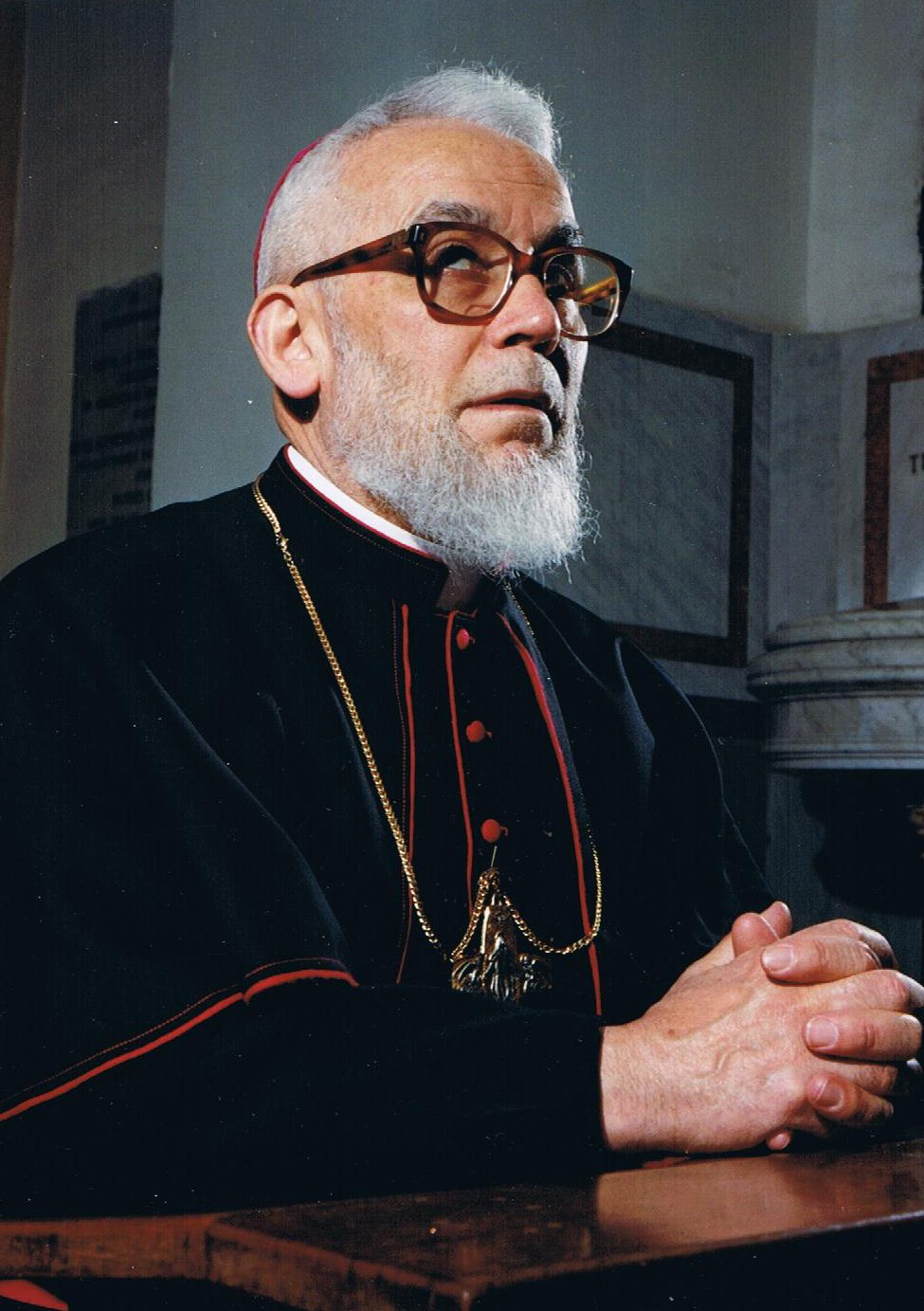 The Most Reverend Francesco Saverio Toppi was Archbishop Prelate of Pompeii and radiated the joy of being a Christian until the last day of his life on earth. His character, his unfailingly friendly smile, fidelity to the crucified and risen Christ, his total and unconditional love for Mary, for the Church and for the poor were, constantly, the center of his humanity and his priestly vocation. Indeed, Archbishop Toppi’s desire to totally dedicate himself to the Lord took root from a very tender age.

He was born in the rural village of Brusciano in the province of Naples on June 26, 1925, to a family of peasant background. Blessed with a healthy and robust faith, he was a child of great vivacity and was much loved by his brothers and sisters. But he also aroused their concern due to his penchant for mischief. His exuberant character and lively intelligence at such an early age were much like landmines planted in the orderly world of adults. Brilliant in his scholastic achievements, when he was preparing for his first communion, he expressed his decision to become a "monk".

And it was in fact an earnest decision, despite family members not giving it any weight as they considered him unpredictable due to his constant pranks. “Vincenzo the monk? It is not possible!”

He first studied and then taught at the Gregorian University of Rome, where he graduated with a degree in Ecclesiastical History. Later in Naples, he taught Ecclesiastical History at the monastery of Sant'Eframo Vecchio. His humanity, which in his youth made him beloved by everyone, matured excellently by the channeling of his childish exuberances through the furrows of faith and culture.

Having acquired a cultural and intellectual refinement, he graduated with a degree in library and archival sciences. The Order then entrusted him with responsibilities and positions of authority which he always accepted with pure obedience and to which he dedicated himself with great humility. His love for Christ and his quest for the knowledge of the Trinitarian Mystery became his very center, and acted as a lens for his every thought, word and action.

Celebrating the Eucharistic Mystery (and the wonder of its being placed in the hands of the priest) was to be for him, until his final days, a wonderful and awe-inspiring gift. Taken by the Mystery, he sometimes sunk into such contemplation as to make the Eucharistic celebration last a little too long. But, when it was suggested that he reduce the time, he obeyed with a spirit of renunciation and with an attitude of redressing his own selfishness.

He often celebrated the sacrament of reconciliation and was totally absorbed by the Lord to the point of almost not realizing that he was speaking. Regarding these phenomena, his greatest suffering was the fear of deceiving himself and especially souls. He took advice from directors and experts in spirituality: Don Dolindo Ruotolo reassured him by telling him that God was working through him. The reassurance that he remained in God's will also came from Jesuit Father Cappello, from Bishop Pasquale Mazzone, from Vocationist Father Nicola Assouad and from Father Giuseppe Galasso. Everyone responded in the same way: "Don't worry ... think of loving Jesus and don't worry about anything", "God’s hand is in that", "You can't fight it", "Leave it to the Lord". In the spring of 1956, Father Francesco had a meeting with Padre Pio in San Giovanni Rotondo from whom he heard the same assurances. The friar from Pietrelcina wanted him as a spiritual son: other enlightening encounters then followed.

When he was provincial superior of the Capuchin Friars Minor in Naples from 1959 to 1968, due to his responsibilities, he went several times to Latin America and Africa. In Brazil he opened a mission, now a province, in the southern part of Bahia.

Appointed as Provincial Minister in Palermo from 1971 to 1976, during a time of difficulty and crisis within the Province, and even at the risk of his own life, he succeeded by way of prayer, gentleness and humility, to bring the Capuchin fraternity back to unity and harmony. He returned to the silence of anonymity, a friar among friars, without ever losing that smile that revealed the brightness and depth of his spirit and the attentiveness he had toward all those he met. Important and lasting encounters such as those with Chiara Lubich (whose ideals regarding unity deeply influenced his spirituality), Silvestra Tirri, Bishop Aurelio Signora, Elisa Springer, M. Anna Maria Cànopi, the Servants of God Nina Lolli and Nina Lanza. His fraternal spirit affected everyone.

On October 13, 1990, Blessed Pope John Paul II appointed him Archbishop Prelate of Pompeii and Pontifical Delegate for the Marian Shrine there. He received episcopal ordination from His Eminence Cardinal Michele Giordano, Archbishop of Naples, on December 7, 1990, in Pompeii. The joy of being in a Marian shrine and the deep sense of respect he had for his assignment helped to lead him to his destination. He presented himself to the appointment of Episcopal Ordination without any signs of pomposity or desire for affluence.

Such was the case for Francesco Saverio, that his poor lifestyle as “friar” Francesco was also to continue as "Bishop" Francesco.

In accordance with canon 401 § 1 of the Code of Canon Law, he renounced the administration of the Prelature of Pompeii in the year 2000, a resignation accepted by the Holy Father on February 17, 2001.

By unanimous consensus, one could encounter through his writings and through the testimonies of those who knew him, a man filled with the Holy Spirit who spent his life in the effort of making room for Jesus. One and all learned from him the ability to look upon the reality of our world with the eyes of the Father.

His dies natalis was on April 7, 2007. By his request, he was buried in the crypt of the Shrine of the Blessed Virgin of Pompei to serve as an "underground pedestal to the throne of Mary".

More in this category: « Librarians, Archivists and Directors of Capuchin Museums Interview with Br. Roberto Genuin »