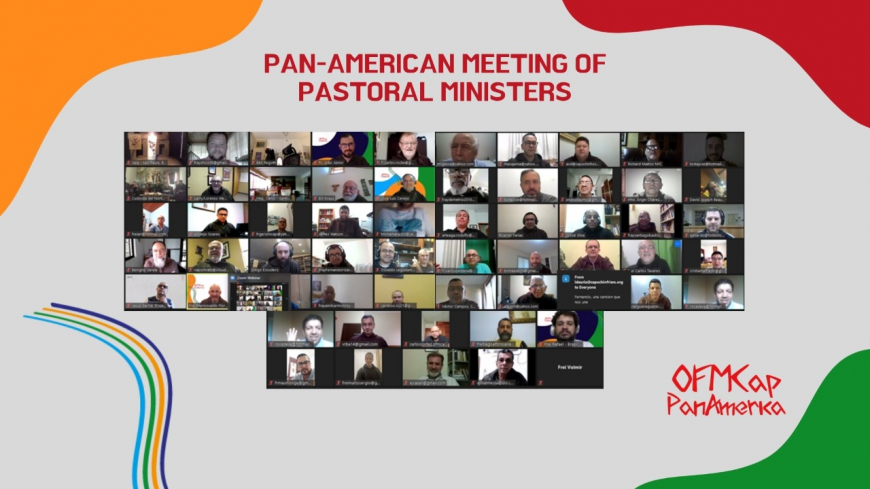 Capuchins from all over the Americas set a date in Panama for a PAN-AMERICAN MEETING, which was to take place in October, 2020. The purpose was to rekindle the flame of the charism throughout North, South and Central America. The friars were preparing with prayer, special celebrations and with feedback from three local chapters to discuss the history, the nature and configuration of our Capuchin presence, and new dreams about our mission, formation, structures and collaboration.

Most of the fraternities have held chapters and sent their summaries, and these were duly considered during deliberations. It was the first time that ministers and delegates from all over the two continents would venture to overcome language, cultural and socio-economic barriers in order to sit together and advance the Capuchin reform throughout the New World.

Unfortunately, the pandemic caused the meeting to be postponed until May 2021. The location had to be changed to Sao Paulo and the schedule adjusted. Furthermore, to keep the friars animated, the planning committee prepared a themed local chapter and also a celebration of the Virgin of Guadalupe for all the fraternities. They regrouped and produced new reflections. But the cruel pandemic forced the meeting to be suspended again. What to do? The agenda, the activities, the summaries from all the chapters were already all in place ... and there was a risk of losing enthusiasm.

So, it was decided to initiate the meeting online at the scheduled date, with a revised agenda that would culminate with an "in person" assembly in May 2022. This meant that the meeting would last an entire year. Official online gatherings were then scheduled for all superiors and delegates: opening meeting (May 3rd), on mission (June 7th), on formation (September 13th), on structures (November 8th) and one on collaboration (March 7th, 2022). Three have already come to pass with excellent participation. Each online meeting features a uplifting introduction by a friar of note (respectively: Br. Helmut Rakowski; Br. Jaime Rey; Br. John Corriveau; Br. Mauro Jöhri). Their reflections follow up on accumulated ideas from the local chapters; this leads to break out discussions in language groups and then finally to presented conclusions. In addition, there's much audio and video materials provided by many of the circumscriptions.

In tandem with these official meetings, it was decided to hold additional online meetings during the other months that are open to all friars of the Americas. Already, a JPIC meeting was held in April, a meeting for friars in formation in July, and one for formators in August. Planned for October is a meeting for friars in pastoral ministry, and in December one for young friars (i.e. those who have professed no earlier than 2010). Participation in these meetings has been remarkable. They've inspired a singular kind of enthusiasm across the Americas. Each meeting has its own dynamic, in one or two sessions, with a specific introduction. The main objective is to inspire the friars to express their thoughts either in groups or with questionnaires, or in exercises for circumscriptions, and then conferences; finally culminating in a summary presented during the second session a week or two later.

We are living a true kairós and we do not want to lose even a morsel of what the Spirit is giving us through our leadership and special guests, but also through each and every friar who get involved. In fact, this is one of the new challenges faced by the planning committee: to give the right follow-up to new insights as they arise. It's already been noted that the pandemic has given us the opportunity to enrich the original project much more!

We pray to God that we will succeed in advancing on this path and that He will complete the work he has begun.  Pax et bonum!

More in this category: « Meeting of the Capuchins of Europe Online Version of the Analecta »