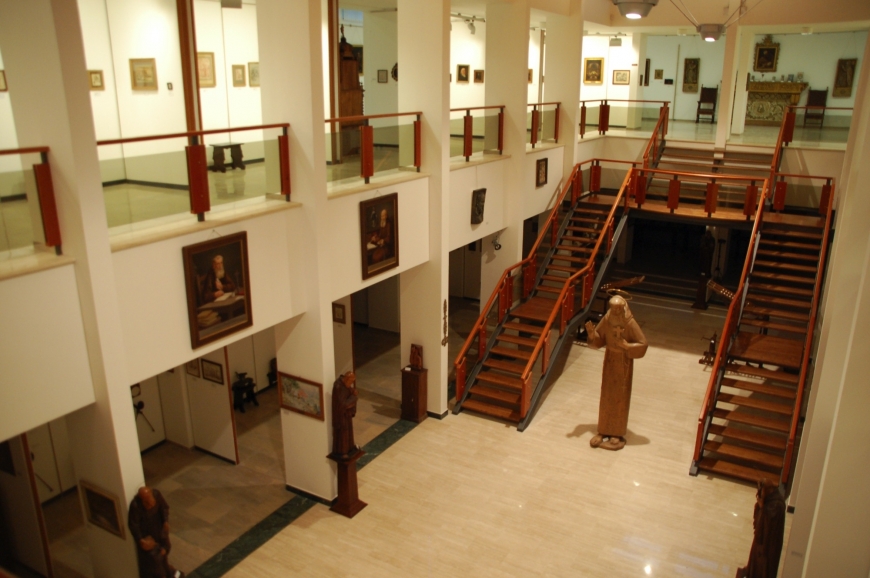 The main nucleus of the Franciscan Museum was established thanks to P. Louis-Antoine de Porrentruy (France) who collected iconographic material for the illustration of a volume on St. Francis, which was released by the publisher Plon of Paris at the end of 1884 under the title: Saint François d'Assise. With the material collected for the volume only partially used and continuously increasing, Louis-Antoine organized a Franciscan Museum in 1885 in the convent of Marseille (France). It was inaugurated in October 1889 by the General Minister Bernardo d'Andermatt.

In the following year, due to the amount of material flowing in, it became necessary to expand the museum with another larger room. Then, in 1896 a third large room was opened.

For the defense and protection of the Museum, the founder had meanwhile obtained in 1895 from the Holy See the Papal Brief Minime nos latet, signed by Leo XIII himself. It was forbidden under penalty of excommunication to "remove, dispose, barter, sell or even simply bring anything else from the aforementioned Franciscan Museum of Marseille".

However, in the years 1903-1904 it became necessary to go underground with the most important pieces of Franciscan artistic history. Indeed, in 1905, in accordance with the Masonic law of July 1901, all the objects which were present in the Franciscan Museum were sold at public auction. Towards the end of 1912, the museum reopened in Rome, with the pieces saved by P. Louis-Antoine, at the General Curia on via Boncompagni. They were then transferred in 1927 to the Historical Institute in Assisi, which was solemnly dedicated on November 29, 1929. From that point forward, the museum followed the fate of the Historical Institute.

Features of the Franciscan Museum

The Franciscan Museum is not an artistic, historical or archaeological museum, although it includes many objects of high artistic quality and great historical value. Instead, it is placed in the category of specialized museums. By way of the objects displayed in its rooms, the museum illustrates the history of the Franciscan Order.

Although the idea of the museum was the brainchild of a Capuchin friar, he did not limit his collection to items only from that branch of the Franciscan family. He extended his interest to the whole Franciscan Order, to its most celebrated personalities, known for their holiness, learning or social sensitivity: first of all in the three main branches of the First, Second and Third Order; then in the various families and reforms within the Order, such as the Conventuals, Friars Minor, Capuchins, Observants, Recollects, Reformed and others. As far as possible, it included the Franciscanism of all nations, even those where the Franciscans went as missionaries.

A particular feature of the museum is that it documents Franciscan art and culture throughout the centuries (i.e. from the 13th to the 20th centuries.)

The Franciscan Museum, which by a ministerial order of September 15, 1965 is registered among non-state museums (minor, diocesan or religious museum, No. 246), is open to the public only on request.

Presentation of the museum – photo:

More in this category: « The Historical Institute The Capuchin Central Library »