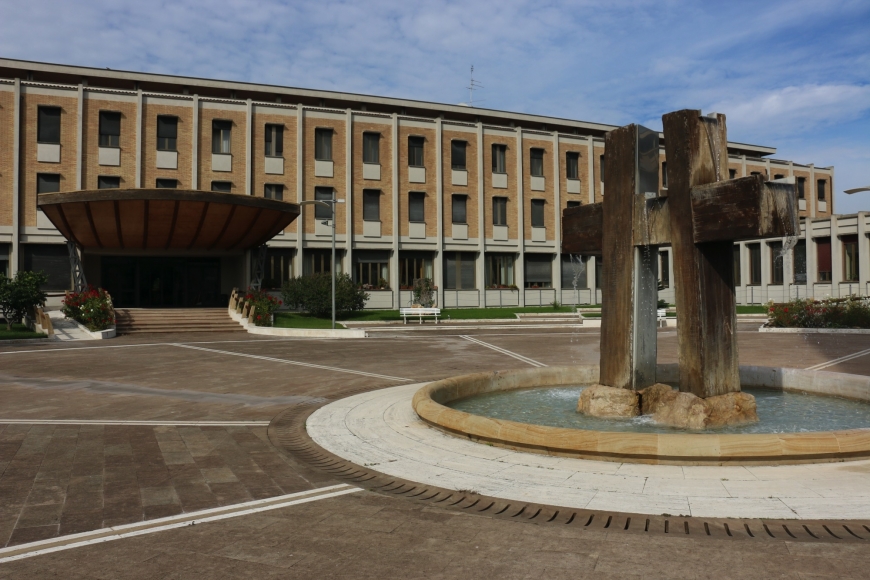 In Rome, besides the General Curia, one will find the International College of Saint Lawrence of Brindisi. It is a large structure, where some important institutions of the Order are located, such as the Historical Institute, the Franciscan Museum, the Central Library and Historical Archive of the Order, as well as some aspects of the Franciscan Institute for Spirituality.

At the Collegio di San Lorenzo, friars are drawn from all over the world to deepen their formation by attending any of several nearby Roman Pontifical Universities and Institutes. Due to the presence of the Order’s aforementioned institutions, such as the library and the archive, students can make use of resources on campus to enrich their studies and research, especially in regards to the history and spirituality of the Order.

Due to its large capacity, the Collegio is usually the seat of the Order’s General Chapters and often its Plenary Councils as well.

These institutions are surely of great importance to the life and history of the Order. Preserved here are a precious heritage of documents that allow us to recall our past, to build on our present and to accumulate for later generations the history that will have preceded them. In these modern times, the concern for punctual registration is met not only by using the traditional means but also with electronic media and information technology.

With the following series of entries, we wish to make the Institutions of the Capuchin Order better known to all the friars throughout the world.

Institutions of the Order – Part I

As far back as 1911 - 1912, the General Minister Pacifico da Seggiano intended on creating a house for scholars in the general friary of Frascati, equipped with a print shop and any necessary academic supports. But his plans were not realized.

It was General Minister Melchiorre da Benisa who officially announced to the Order on July 23, 1926 the purchase of the Palazzo Sperelli in Assisi, on Via San Francesco 23. This building hosted a group of scholars engaged in studies concerning the Order, with a library, the Franciscan Museum and an academic publication all at their disposal. Four years later, on November 14, 1930, the same General Minister signed a decree of erection for the "Collegio di S. Lorenzo da Brindisi in Assisi", which was the original name of the Historical Institute.

In order have more convenient access to Rome's archives and libraries, the "Collegio di Assisi" asked for and obtained permission to move to Rome on Via Sicilia 159. Between November 4 and 10, 1940 it was temporarily set up in the rooms of the General Hospitium, in a wing at Via Romagna. It also existed apart from the library or the Franciscan Museum during this time. So in order to avoid confusion with the name of the “Collegio Internazionale di S. Lorenzo”, the “College of Assisi” changed its name to the Capuchin Historical Institute.

The Historical Institute is an international fraternity which falls directly under the General Minister. As such, it is defined specifically by the Constitutions and its own Statute. According to this Statute (1995), it has the following two purposes:

More in this category: « Letter of the General Minister The Franciscan Museum »