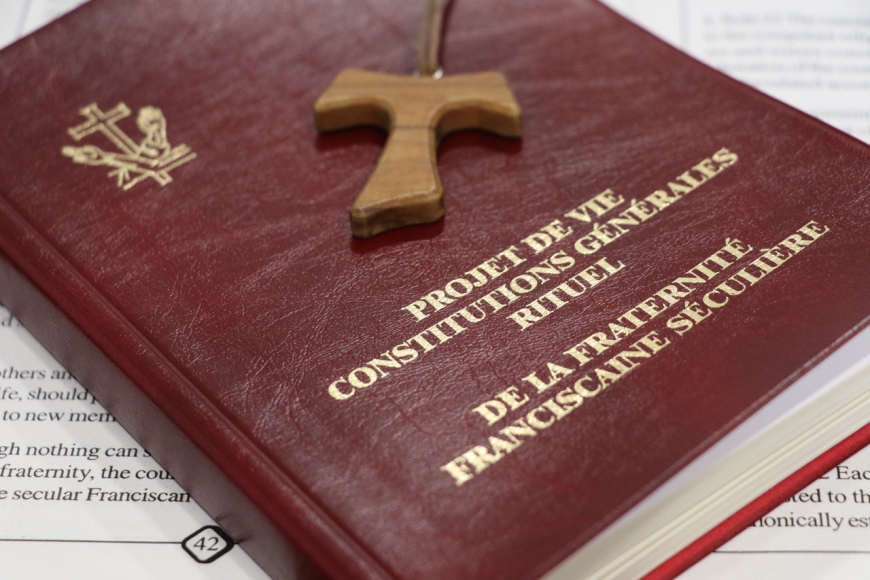 Dear sisters and brothers, may the Lord give you peace!

On June 24, 1978, the Holy See approved the renewed Rule of the Secular Franciscan Order with the publication of the apostolic letter Seraphicus Patriarcha. It was the recently canonized Pope St. Paul VI, himself a postulant Franciscan tertiary in his youth, who gave this gift to the Franciscan family just a few weeks before his death. Forty years have passed since the promulgation, and this anniversary seems to us a fitting occasion to address to you this celebratory letter. As is well known, in the Bible the number forty is charged with symbolic meaning; the span of forty years is first of all a generation and also seems to be the time for mature decisions. Therefore, this seems an opportune moment to thank the Lord for all that the sisters and brothers of the OFS are already living and to give new encouragement to their presence, which is invaluable for the whole Franciscan family.

“The Seraphic Patriarch Saint Francis of Assisi, during his life and even after his beautiful death, not only attracted many to serve God in the religious family founded by him but also drew numerous members of the laity to enter his communities while remaining in the world as far as possible.” Thus the beginning of the apostolic letter of Pope St. Paul VI, issued in 1978, recalls how various lifestyles of Christian discipleship in the Church emerged from the experience of St. Francis.

“Among the spiritual families raised up by the Holy Spirit in the Church [cf. Lumen gentium 43], the Franciscan family unites all the members of the People of God: laity, religious, and priests, all of whom recognize the call to Christian discipleship in the footprints of St. Francis of Assisi. (Pope Venerable Pius XII, Speech to Tertiaries I, 1.7.1956). In different ways and forms, but in a living and mutual communion, they aim to make present their common charism of the Seraphic Father in the life and mission of the Church.” (cf. Apostolicam Actuositatem 4,8; OFS Rule I, n. 1)

It would seem that the possibility of serving the Lord fully in every state of life was already in the intuition of Francis. Thus, in some sense he anticipated the wisdom that every Christian in the Church is called to holiness, that wisdom that Vatican II emphasized strongly and Pope Francis has recently recalled in his apostolic exhortation Gaudete et exsultate: “Strengthened by so many and such great means of salvation, all the faithful, whatever their condition or state, are called by the Lord – each in his or her own way – to that perfect holiness by which the Father himself is perfect.” (n. 10, quoting Lumen gentium 11) In fact, the Franciscan Third Order (today the Secular Franciscan Order) has been enriched in its history by many figures of holiness; it is enough to think of Angela of Foligno, Bridget of Sweden, Catherine of Genoa, Elizabeth of Hungary, Gianna Beretta Molla, John Bosco, John XIII, Giuseppe Moscati, King Louis IX of France, Margaret of Cortona, Pius X, and Thomas More, just to name a few of the most noted saints. To all of the saints and blesseds is added the most recent, Veronica Antal, beatified on September 22, 2018. With this “marvelous and varied flourishing of Franciscan holiness” (collect for the feast of All Franciscan Saints), the Franciscan Third Order has truly shown itself indispensable for the full expression of our charism. 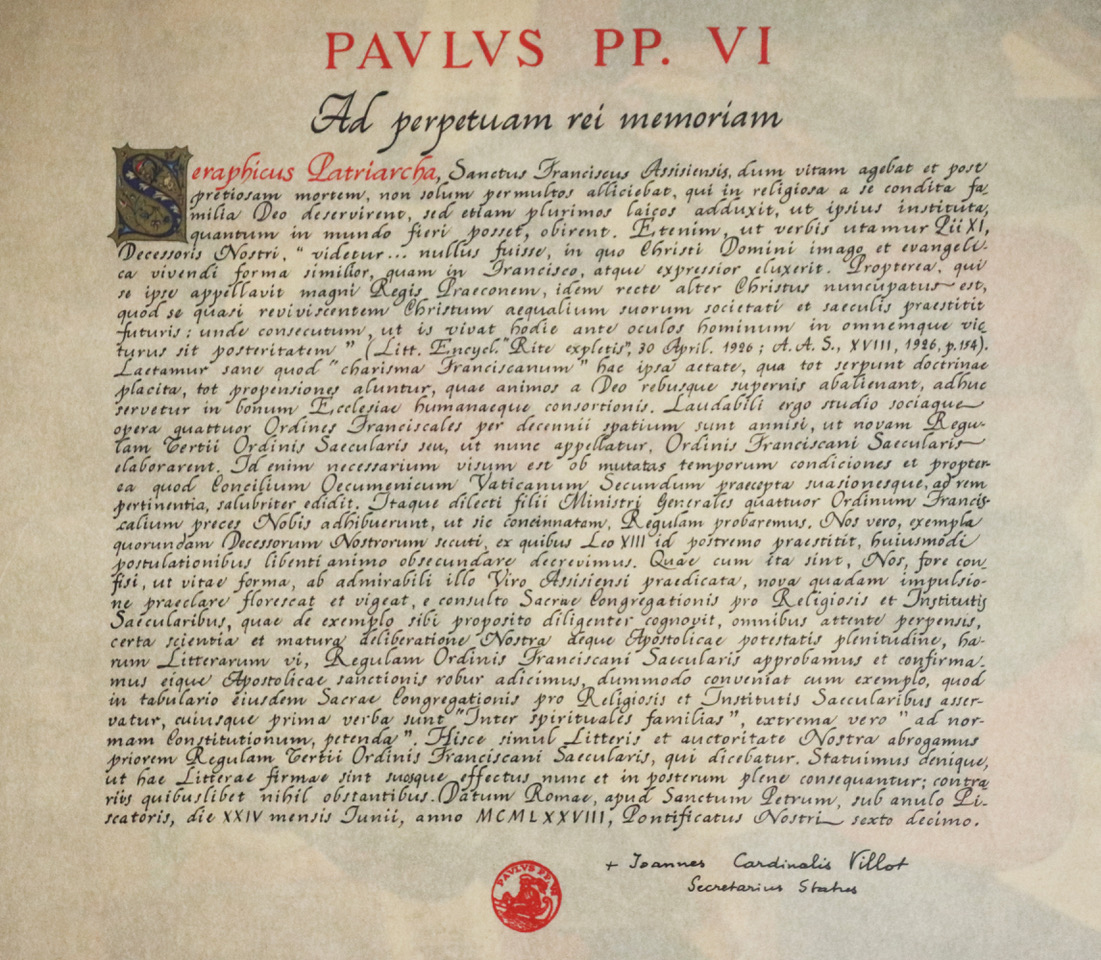 3. The challenges of today and the mission of the Church

The challenges facing the Church of today are many and complex. However, the time in which we live is also certainly a kairos, a time of special grace in which it is possible to experience a “new chapter of evangelization”, as Pope Francis invites us to do in his apostolic exhortation Evangelii gaudium: “In all the baptized, from first to last, the sanctifying power of the Spirit is at work, impelling us to evangelization. […] In virtue of their baptism, all the members of the People of God have become missionary disciples (cf. Mt 28:19). All the baptized, whatever their position in the Church or their level of instruction in the faith, are agents of evangelization.” (119-120) As Franciscans, we see ourselves as particularly in harmony with the invitation of the Pope to live as a Church that goes out toward the geographic and existential peripheries of the world, so full of divisions, injustices, and sufferings. We are called to help build a universal evangelical fraternity, to work for the care of creation and for peace and justice, with a special consideration for the poorest and most needy, after the example of our Seraphic Father Francis, who “was particularly concerned for God’s creation and for the poor and outcast. […] He shows us just how inseparable the bond is between concern for nature, justice for the poor, commitment to society, and interior peace.” (Laudato si’ 10) Such an complex and demanding task requires a proactive and effective collaboration, as well as visible communion, among the members of the Franciscan family. In our time, the contribution to this collaboration of the brothers and sisters of the Secular Franciscan Order is a particularly urgent necessity.

Collaboration and communion among the members of the Franciscan family, today more than ever, must express itself in a reciprocity of care and mutual enrichment. “In Church Communion the states of life by being ordered one to the other are thus bound together among themselves. […] They are different yet complementary, in the sense that each of them has a basic and unmistakable character which sets each apart, while at the same time each of them is seen in relation to the other and placed at each other's service. (Pope St. John Paul II, Christifideles laici, 55; italics original)

On the one hand, the Church has entrusted to the friars of the First Order and TOR the spiritual and pastoral care of the OFS, as is recalled in the Rule: “As a concrete sign of communion and co- responsibility, the councils on various levels, in keeping with the constitutions, shall ask for suitable and well prepared religious for spiritual assistance. They should make this request to the superiors of the four religious Franciscan families, to whom the Secular Fraternity has been united for centuries.” (OFS Rule, chapter III, n. 26)

On the other hand, those belonging to the OFS are called to express the secular aspect of the Franciscan charism, which is what characterizes their spirituality and apostolic life, living fully their specific call, supporting also by their prayer and action the vocation of the friars with whom they share the charism.

Dear sisters and brothers, on this fortieth anniversary of the approval of the Rule of the Secular Franciscan Order, we invite you to thank the Lord for the gift of our common Franciscan vocation and to renew your apostolic zeal that each might live his or her own mission in a creative way.

For our part we ask for all of you an abundance of divine blessings through the intercession of the our Seraphic Father St. Francis and the Blessed Virgin Mary, Queen of the Franciscan family.

More in this category: « More than 300,000 visits General Council Meetings »