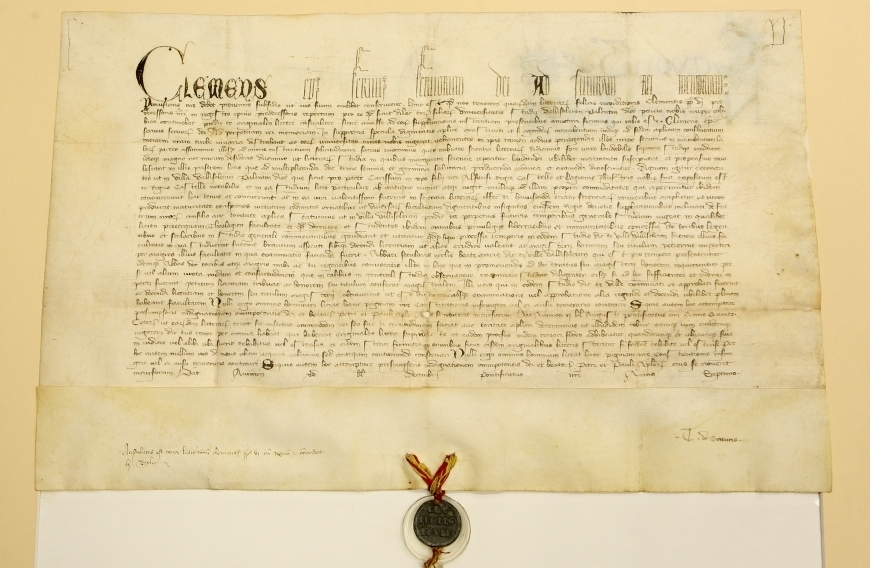 The Order was founded around 1525, when the Franciscan friar Matteo da Bascio - ordained priest in the Marche region, Italy - was convinced that the lifestyle led by the Franciscans of his time was not what Saint Francis had imagined. He wished to return to the original lifestyle in solitude and penance as practiced by the founder of his order.

His superiors tried to suppress these new notions, and thus Matteo and his first companions were forced to hide from the Church authorities, who wanted to arrest them for abandoning their religious obligations. These were the years of the Lutheran Reformation and, therefore, any attempt at renewal was badly regarded by the superiors of the religious orders. Matteo and his friends found refuge with the Camaldolese monks; in gratitude, they subsequently adopted the hood worn by that order, which was the hermit's mark in the Marche region, in addition to wearing a beard. The popular name of their movement originates from this characteristic of their habit.

In 1528, with the mediation of Caterina Cibò, Duchess of Camerino, Matteo obtained the approval of Pope Clement VII with the bull Religionis zelus. He was given permission to live as a hermit and to go everywhere preaching to the poor. And this permission was not only for him, but for all those who would join him in his attempt to restore the most literal observance possible of the rule of St. Francis. Matteo and the original group were soon joined by others and initially they were called Friars Minor of the Hermetical Life and due to the opposition of the Observants, they became the congregation: the Friars Minor Hermits, a branch of the Conventual Franciscans, but with their own vicar.

A difficult period was encountered in 1542, when the Vicar General of the Order, Bernardino Ochino, joined the Protestant Reformation.

Pope Gregory XIII, in 1574, allowed the Order to settle in "France and all other parts of the world and to erect houses, places, Custodies and Provinces", authorizing, in fact, its diffusion outside Italy. In the 16th century, the Capuchins numbered about 14,000 friars with nearly 1,000 friaries. The order’s numbers would further increase between 1600 and the mid-1700s. Eventually, they would reach 34,000 friars and 1,700 friaries. These were also the years in which the Order modified, or rather, perfected some of its initial characteristics. While remaining faithful to the vow of radical poverty, the Capuchins had shown themselves to be excellent preachers; and this, given the initial relationships with the Conventual branch, led to a "conventualization". This process was also supported by the Holy See, which in those years urged religious orders to suppress lesser or undersized religious houses, convinced that by encouraging larger local fraternities, they could be better controlled. The initial small shelves of books became real libraries, necessary to ensure good training for preachers. To understand the role of the order during this century and a half period, consider Alessandro Manzoni’s choice of a Capuchin, Br. Cristoforo, to oppose Don Rodrigo in his Promessi Sposi (The Betrothed).

The Capuchins were also very active in the missions: for example, as Pellegrino da Forlì reports, the Indian archdiocese of Agra was entrusted to the brothers of the order since 1703.

From the Second Half of the
Eighteenth Century Until Today

From the second half of the 1700s to the end of the 1800s, the Order experienced a time of crisis. Bear in mind that between 1787 and 1847, no General Chapter of the Order was held, only assemblies of major superiors among groups of provinces divided up within the Order. These difficulties were due more to political-social than religious reasons. The French Revolution and similar experiences in other European states led to the suppression of friaries and even entire provinces. The same can be said for Italy in the late nineteenth century, where the law of Guarentigie deprived religious orders of many goods and even religious houses. However, this was accompanied by a more conscious missionary work, especially in the Americas, where the Order grew very rapidly.

Despite the difficulties at the beginning of the twentieth century, the Capuchins numbered around 9,500 in over 600 friaries. The General Chapter of 1884 had decided to repurchase many of the friaries that had been lost during the previous century and the new Constitutions were approved. The precedents were from 1643. The twentieth century was, for all religious orders, the century of the return to origins and the opening to novelties in the contemporary world. Consider the Second Vatican Council and the invitation to all religious communities to rediscover the original reasons for their charism. The Capuchins were not exempt from the crisis of vocations, which hit the Catholic Church in Europe and North America in the 1960s and 1980s. Nonetheless, the Capuchins remain one of the largest and most widespread orders of the Catholic Church.

The Capuchins, since their origins, have been marked by a particular attachment to prayer and care for the poor and the sick. The Order grew rapidly both in size and popularity, given its tendency to imitate the life of Jesus as described by the Gospels. These different approaches were often complemented by their mission in the countryside, which was poorly served by the existing parishes. Here, they were meeting the needs of the faithful in the absence of an effectively prepared secular clergy. They maintained a characteristic proximity to the peripheral towns and to the countryside, adopting a simple homiletic style imbued with everyday life.