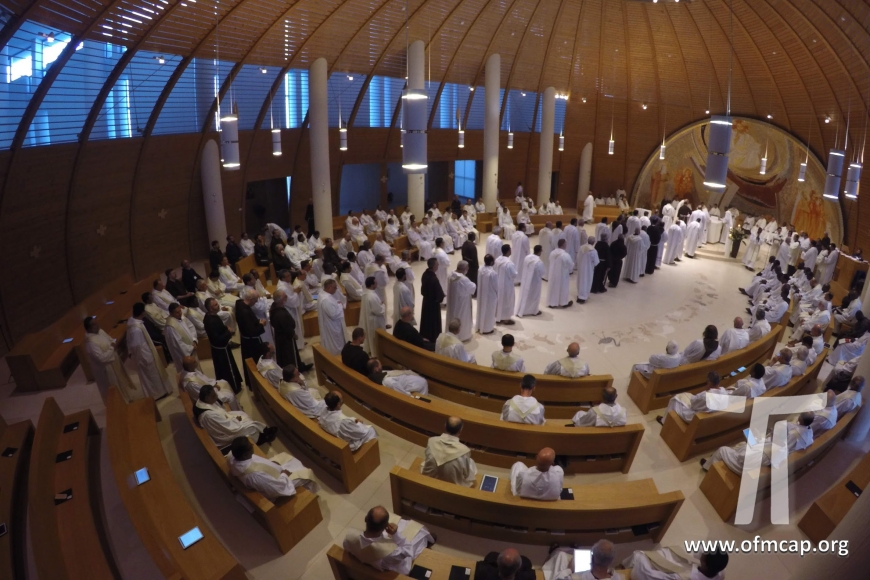 Rome, September 15. The work of the Chapter concluded during the evening of this day dedicated to Our Lady of Sorrows. This was ahead of schedule – the Chapter was to conclude on September 16 – thanks to the quickness with which this Chapter has worked, and thanks above all to the use of the tablets for voting in the plenary assembly.

The morning of this final day was given to voting on texts prepared by the commissions. After remarks from the secretaries of the coetus, who synthesized what had been said in these groups, texts were presented and motions were put to a vote. The motions were on modifications to the Statutes of the General Curia, on fraternal collaboration, and on solidarity among the circumscriptions. All of the motions were approved by a broad majority. Before concluding, the director of the Mission Office offered a brief reflection on the Capuchin Volunteers, which has become a wonderful program of the Order in just a few short years. Finally, the Chapter Secretary invited the capitulars to end the Chapter officially.

The final act of the Chapter was an evening Eucharist at which the General Minister, Br. Roberto Genuin, presided, flanked by all the members of the General Council. The liturgy was enriched by song in various languages: Portuguese, Swahili, Indonesian, Spanish, etc. In his homily the General Minister reflected on the title of an important letter of his predecessor, Let us Fan the Flame of our Charism, and invoked the intercession of the Blessed Virgin Mary on the whole Order. After the homily the brother capitulars were invited to renew their religious profession, each in his own language, and their commitment to the vows of obedience, poverty, and chastity. At the end of the celebration, the Te Deum was sung to thank the Lord for the support of his grace during all the work of the Chapter. Peace and good!